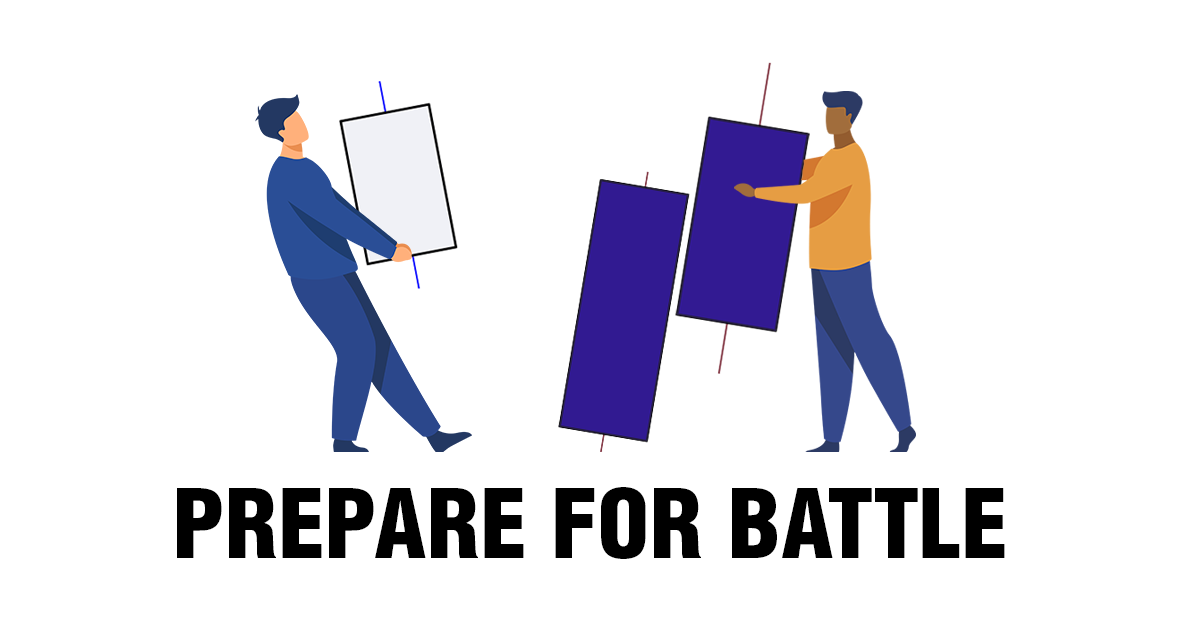 ? HOW TO IDENTIFY A HANGING MAN: A candle with a small body, long lower wick at least twice the length of the body, and little to no upper wick. Technically, this type of candle occurs during an uptrend as during a downtrend a similar looking candle is known as a hammer, which indicates something entirely different.

⚔️ WHAT IT MEANS IN BATTLE: A hanging man indicates that whilst the bull army has been strong and advancing significantly into bear territory, they may be starting to lose strength as the bear army was able to push bulls back the distance of the lower wick. Whilst the bull army was able to bring the price back before the candle close, the sell-off is an indication that bear soldiers are gaining strength and may indeed strike again.

⚔️ WHAT IT MEANS IN BATTLE: We want to emphasise here that your focus should not be on trying to determine whether a candle is or is not a shooting star, but rather on the psychology of why it may work as a reversal. A shooting star candle means that the bull army advanced into enemy territory until, during one candle, bears violently fought back and pushed the bull army back. The bear army then got aggressive by pushing back into bull territory and regaining full control of the battlefield.

⚔️ WHAT IT MEANS IN BATTLE: The three black crows pattern suggests that the bear army is in full control of the battle and continue to push aggressively into bull territory. The longer the body of the candle, the stronger the bear army is said to be. The fact that there are no wicks reinforce the strength of the bears as the bull army failed to put up even a slight fight.

? HOW TO IDENTIFY A BEARISH HARAMI: This is a two candle pattern that occurs near the potential end of an uptrend wherein a long body bullish candle is followed immediately by a small body bearish candle. The open and close of the second candle is entirely confined to the range of its previous candle.

⚔️ WHAT IT MEANS IN BATTLE: This type of candle pattern indicates that although the price was previously in an uptrend and bulls were in control, on the first bearish candle the bulls were unable to continue pushing into bear territory and there was a standstill and suggests that there is uncertainty in the market. The size of the second candle determines how strong or weak the bear army is. The smaller the second candle, the higher the chance of a bearish reversal.

? HOW TO IDENTIFY A DARK CLOUD COVER: This pattern occurs during an uptrend and consists of a bearish candle that opens above and closes below the midpoint of the previous bullish candle. The larger the candles, the more meaningful the pattern is.

⚔️ WHAT IT MEANS IN BATTLE: This type of pattern suggests that bulls tried to continue pushing up into bear territory at the open of the candle, but the bear army fought back and pushed bulls back. The larger the candles, the stronger the bear army is and the higher the chance of a bearish reversal.

And thus concludes Part 3 on Candlestick Patterns Guide. This article should have provided a high level overview of Bearish Reversal Patterns and how to get started with interpreting them.