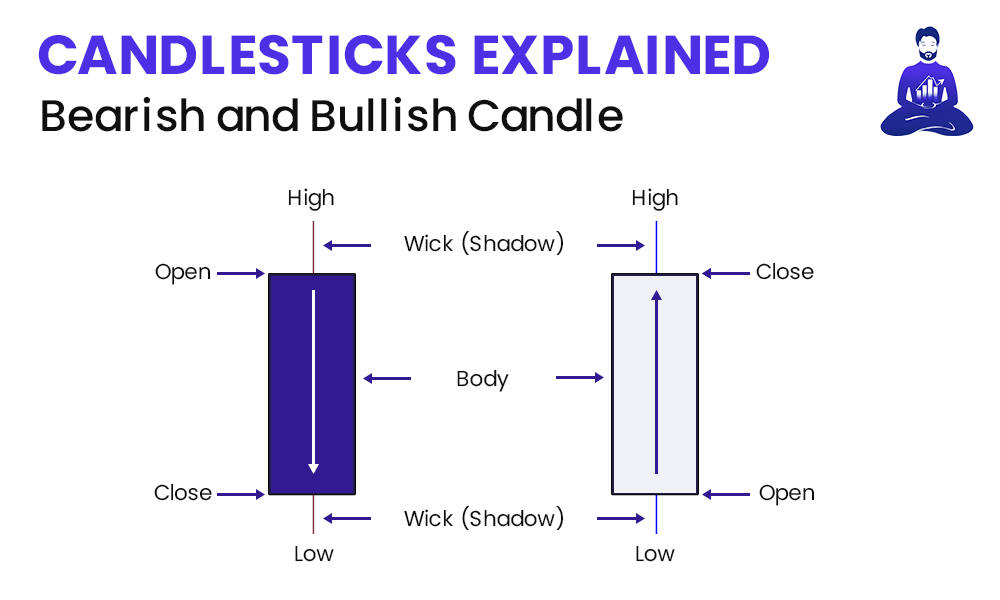 Let’s start with how to read candlestick charts as this forms the basis of technical analysis. Here are the components of a bullish or bearish candlestick you should be aware of

1️⃣ Body: the distance between the close and open price

Here’s an example to clarify things:

Let’s say you’re analysing a candlestick on the 15 minute time frame. This means that there is exactly 15 minutes between the open price and the close price of the candle. Let’s say that at the start of this 15 minute candle, the price is $8. During this 15 minute interval, price goes from the $8 opening price as low as $5. It then moves up to a high of $13 before falling back down to $10, where it eventually closes. In this case:

Now we understand the candles in isolation, we can begin to consider them in aggregate. That is, we can explore how candles come together to tell a story.

? Imagine there is a battle waging between buyers and sellers. There are two armies fighting this battle. The bodies of the white candles represent the bull army whereas the bodies of the purple candles represent the bear army. The chart represents the battlefield and who is currently winning the battle. Both armies are trying to get into each other’s territory. Check out our YouTube video where we elaborate on this analogy further.

In this analogy, large candle bodies represent the bull army taking control of the battle and invading bear territory. The wicks represent failed attempts to get into enemy territory, so when we see large wicks, that shows strength coming from the opposite side.

Many traders rely on memorising chart patterns such as ascending triangles and head and shoulders patterns or candlestick patterns like a bullish engulfing candle or pinbar candle.

? Thinking about the markets in terms of a battle between bulls and bears, however, helps understand the psychology behind why these patterns work in the first place. Understanding why candles form the way they form and patterns form the way they do is infinitely more important than memorisation.

A very simplistic approach is to consider whether a chart is ‘bullish’ or ‘bearish’. Instead, we always imagine there is a meter.

What’s Behind The MetaMask?

Player of the Match

Burned at the Stake?